The female anatomy does not receive the attention it deserves. This has led to misinformation and confusion about the female body, making it difficult for an individual to know their own body and most importantly, feel empowered in it. The aim of this feature, is to provide some basic information on the key parts of the female sexual anatomy. Knowledge is power!

Often the vagina and vulva are used as interchangeable terms but they are in fact different things. A ‘near enough is good enough’ mentality to naming female anatomy, has been a common default for a long time. If I had a broken arm, I would not describe it as, 'that thing hanging off the side of my body’, so why are women so often taught to describe their genital's as 'down there' or call the whole region a vagina? Why not use the correct terminology instead of finding conservative parallels?

How can you learn about your body and feel empowered, if you do not know what's what?

Below is some basic information about the Vs.

Vagina’s are also self cleaning and therefore do not need specific hygiene products which are widely marketed to women. In fact, these can damage to vulva-vaginal health and put out the balance of healthy bacteria leading to infections eg. yeast infections. 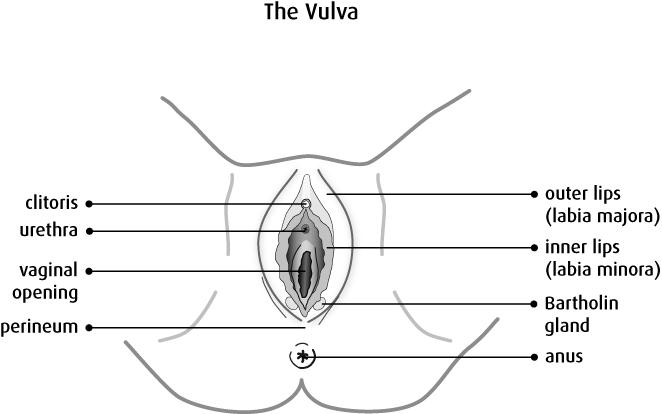 The vulva is the collective name for the external genitalia. It comes in all different shapes, sizes and colours. As seen in this diagram, the vulva consists of the labia majora, labia minora, clitoris, vaginal opening, urethra and bartholin gland.

When sexually aroused blood flow to the vulva increases which enlarges the area and can make the skin darken. Sensitivity can come from all areas of the vulva and this all depends on the individual.

It is important to remember, that this part of the body comes in all shapes, sizes and colours. Unfortunately, people with vulva's do not get to see images of vulva's very often (unless they are same sex attracted) which can distort ideas of what they are supposed to look like. These ideas of what the perfect vulva is supposed to look like are even entrenched in Australian censorship laws which limit the depiction of protruding labia minora in public images. Protruding labia minora are often digitally removed from imagery to meet these censorship laws further distorting ideas of what the vulva should look like.

Fortunately, there are projects like The Labia Library who are working to normalise the variation of external female genitalia. The Labia Library, produced by Women’s Health Victoria, shows images of real women’s vulvas and some basic information which is very useful. Check it out!

The only known organ in the human body designed solely for pleasure with a confusing history. While this is an interesting fact, what is more interesting is that there is a whole organ in the female body which has only recently been discovered to its full extent.

The clitoris (in some form) has popped in-and-out of anatomy textbooks over the years, the time of the clitoris is finally upon us. The full structure of the clitoris was realised when Australian Urologist Helen O’Connell conducted research, published in 1998, which uncovered the full internal organ through dissection. This was later followed up in 2005 with research focusing on taking MRI's of the region. French researchers later added to this body of work in 2008 and 2009 with a 3D exploration.

These studies have documented the complex interactions between the vagina, urethra and the clitoris which has led to the wider use of interrelated terms such as the Clitoral Complex or the Clitoral Urethral Vestibule Complex.

So what do we now know about the clitoris?

As you can see from the diagram, the clitoris is much larger than the external 'glans' component. The clitoris is a mostly internal organ with only the tip showing at the top of the vulva. It is made up of the same type of tissue as the penis (homologous tissue) and grows significantly in size when aroused. With 8,000 nerve endings compared to 4,000 on the head of the penis it is incredibly sensitive.

Due to the discovery of the full extent of the Clitoral Complex, our understanding of female orgasms has developed. It is now thought that even vaginal orgasms may be caused by stimulation of the internal body of the clitoris. 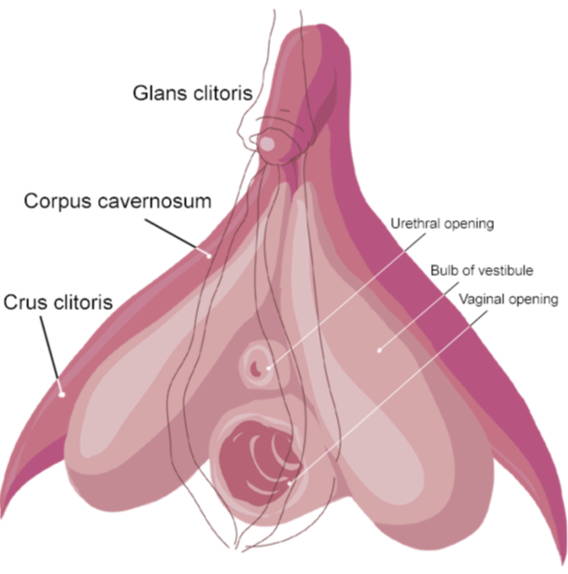 The G Spot. Perhaps the most controversial ‘spot’ on a women’s body. Does it exist or doesn’t it? Where the hell is it? After countless 'Cosmo' articles, talk show features and confused men and women, science seems to have discovered some answers on the G Spot AND it most likely, does not exist how we once thought it did.

The G Spot was named after Dr Gafenberg who in the 1950's, described a pleasurable area on the front wall of the vagina that when stimulated, led to a pleasurable sensation or an orgasm. The G Spot became widely know in popular culture in 1982 with the publication of the book The G Spot: And other discoveries about human sexuality by Alice Ladas, Beverly Whipple, and John D. Perry. This popular book documented stories of women who found G Spot stimulation particularly pleasurable and orgasm inducing. And so the worldwide search for the G Spot began!

If people feel pleasure from this 'spot', what's the problem?

With more research conducted in this 'region', the evidence of an anatomical G Spot is not as strong as it once was. The pleasure some may experience by internal pressure on the front wall of the vagina, most likely has more to do with the involvement of the Clitoral Complex.

The focus on the G Spot created a type of 'orgasm hierarchy' with people placing greater importance on these vaginal (or G spot) orgasms instead of clitoral ones. This puts even more pressure on women to perform and orgasm in a certain way and fails to acknowledge individual differences and the uniqueness of the female body.

In short, what works for one person might not work for another and that's ok! So if you can’t find your G spot don’t worry!

Animated Anatomy of the Clitoris

The Ultimate Guide to the Clitoris for Couples

Health Check: does the 'G-spot' exist?